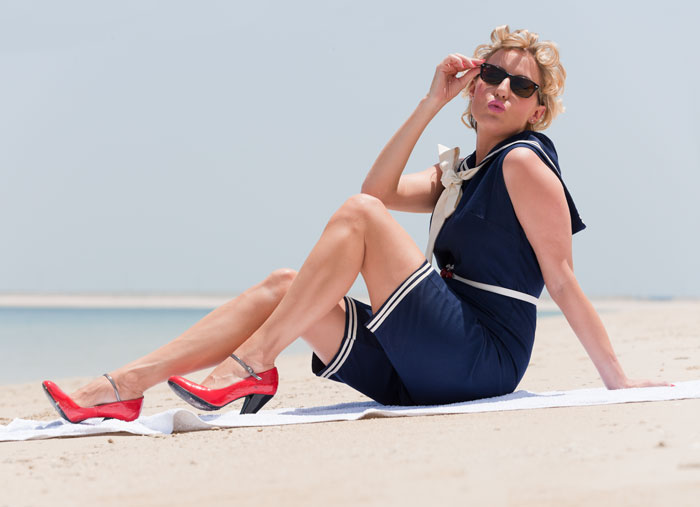 For my first real blog I wanted to tell you a story. I think its a story of success but also of determination and self belief. Its a story about a client of mine, someone I have known for a long time whom I have watched grow and evolve.

This client also happens to be perhaps one of the craziest people I know and I really mean barking mad. When I first met Lucy Bradley she was selling houses, shortly after she went to work for the UAE post office doing what I can’t remember (I’m sure neither can she). After a short period licking envelopes she went on to be an office manager in a small design agency.

Now when I say small i’m not joking. It was in the back room of an old soap factory in Jebel Ali for a graphic designer by the name of ….umm…..!

Whilst i can’t claim credit for the success that followed I do remember a conversation we had one drunken night in the swimming pool. “why don’t you ditch whatsherface and start up your own graphic design agency”.

For most people with no real creative background this would have been a rather daft idea but Lucy being as crazy as a cut snake I knew this could be the soft kick in the derriere that she needed. I also knew that Lucy was infinitely more creative than she even herself appreciated but more importantly I was sure she had the determination to pull it off.

What was born was Plug, one of the most fascination and individual design companies I have ever worked with.

At first creative concepts were based loosely on a desire to play around with self image and this then evolved into a playful ‘Design Hospital’ theme where all the Plug staff were photographed in medical uniforms. After all Plug was dishing out design medicine to the many clients suffering from bad design related emergencies. After following the medical theme for a while Lucy wanted to change tack with Plug and explore a more period 1940’s look and feel. I am wondering if this was because she had some big black shiny boots that she really wanted to wear. The concept was an Agatha Christie murder mystery shoot on Tapribane island in Sri Lanka. Client involvement was important to Lucy so the cast was entirely composed of clients and staff. All credit must be given to Fran for going the extra mile and lying on a sea urchin covered rock and pretending to be dead. After the success of the Sri Lanka shoot the 2013 calendar theme was based on a fictional wartime radio station based in the desert and providing a cover for covert espionage activities behind german lines. Shot in the UAE desert over two days the cast again are all clients and staff of Plug. On a departure from the previous two calendars the 2014 calendar was composite by nature. Clients were photographed in the studio and dropped in to a dollhouse background. The models were photoshopped to give the effect of a doll like appearance. Care was been taken to not go too far with the retouching of the models to give them only a slight Barbie like appearance. Currently in production here is an early sneak preview of one of the images:

From German wartime radio stations and murder mysteries to Barbie doll clients, Lucy is constantly venturing out into new territory. The branding strategy of Plug has not been mapped in advance. Visual concepts have been generated from a purely creative desire to play. Creativity however, should always be the starting point because creative passion is infectious on so many levels and the fluid process of moulding this into a brand strategy then becomes wonderfully organic. The result is a company with a creative soul and an individuality that is rarely seen in a market which is constantly analysing itself to check that its not breaking the rules.

So heres to the crazy ones because perhaps its not the shape of the peg that is the problem but rather the shape of the hole. Being normal should be a taboo because surely holding back your passion is a crime against your own personality. To have the strength of character and self belief to enjoy being different, to understand yourself   and trust your own thoughts even if they fly in the air is the key to unlocking your creative soul. Only then can we ever be truly successful.

On one final note Simon Sinek said “People don’t buy what you do, they buy why you do it” and in this Lucy has certainly found clarity.