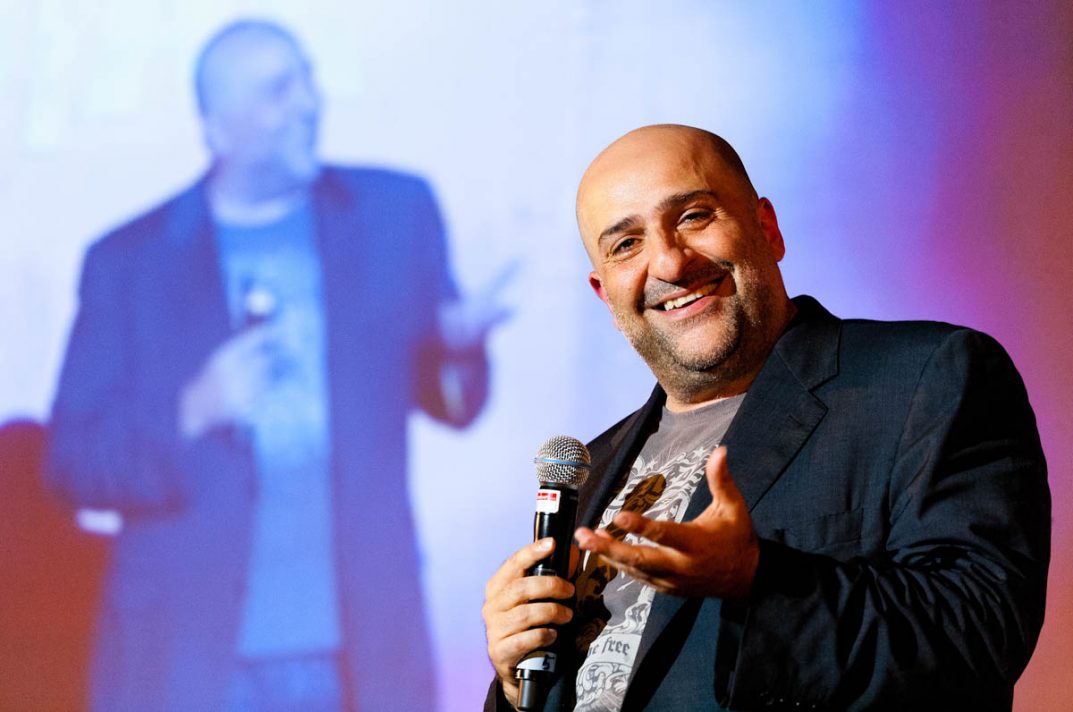 In this edition of ‘Behind the Lens’ I want to share some insights on getting the best out of photographing stage performers by looking at a photograph I made of Omid Djalili for the National newspaper several years ago.

Omid Djalili is one of the most media savvy performers I have photographed and is a great example of the relationship between a photographer and a performer. More on that later, firstly I want to talk a little about the technical aspect of stage and concert photography.

Photographing a performer on stage is perhaps one of the most technically challenging assignments a photographer can be given. The stage lighting and choreography of the event are designed for the audience not the photographer and the performer will often limit access to the first three songs only.

The main difference between a professional and an amateur photographer is that when you have a picture desk waiting to slot an image into a page, you have to give them something. It’s not acceptable to come back empty handed. The first priority is always to use the first song to get a ‘safety shot’. Don’t experiment, play it safe and just nail a sharp, well exposed image showing a little of the personality of the performer. The greatest asset of a professional photographer is reliability. When you know you have an image in camera you can cut loose and experiment, try different angles, exposures etc and bring home a bit of creative flair.

For publicity purposes there are two separate audiences at a performance, those who are actually at the venue and those who are reading about it afterwards. The photographs get more views than the live performance and they hang around on the internet for many years. It’s in the best interests of the concert PR team to get the best visual coverage possible so they may try to ‘work’ the cameras. In the first three songs the performer will be fresh but also the choreography might be directed a little more to the front of the stage and the lighting a little less erratic. Don’t count on this, however, I have worked with some horrific setups in the past.

One thing you can usually rely on is that the performer will be reasonably well lit. A rock star who works the entire stage might be lit with one roving spot but in a tightly choreographed set it might have a very elaborate set up to highlight the performer. It’s worth taking a little step back and having a look at how the lighting crew has set up the stage because this influences how you will set up your exposure.

In some scenarios automatic exposure can work well but more often than not I prefer to use manual exposure. I set my exposure for a certain light on the main subject and react to that. Usually the surrounding lights are not so bright so you can just let them do their thing knowing you will either get deep blacks or nicely saturated beams of colour. If the lighting mood changes then + or – the aperture by a stop or two.

I hope it’s a pretty obvious thing to say at this point but you should be shooting in raw format. This is going to help you in post production because you have more latitude to tweek your exposures but also your white balance is going to be all over the place so don’t rely on the camera to get this right.

A performer will often look to work the camera. This needs to be subtle enough so that the crowd doesn’t feel cheated. As a photographer you have to be ready to respond quickly to the slightest glance or movement.

When you Google images for Omid Djalili you see a visual persona of strong expressions direct to the camera. This is entirely deliberate, Omid will actually look for the cameras in the audience and when he gives an expression out to the crowd it will actually be directed at a camera. The audience are totally unaware of this as it happens so quickly. As a photographer you are constantly looking for something interesting and unique to happen and in this way the artist quite easily can control their own media image.

In photographing Omid I probably had two to three such opportunities. After it happened the first time I decided to move to the side of the stage for a stronger composition as I wanted to include the screen in the background. Normally this is not the way to get an engaging portrait but I hoped that he would find my camera again. Indeed my patience was rewarded and he threw an expression right at the camera.

It is rare that you get a performer to work the camera quite like Omid, but even the big stars will make themselves very accessible to the camera. It’s just a case of being ready, trying to anticipate what might happen and shooting as much as possible.