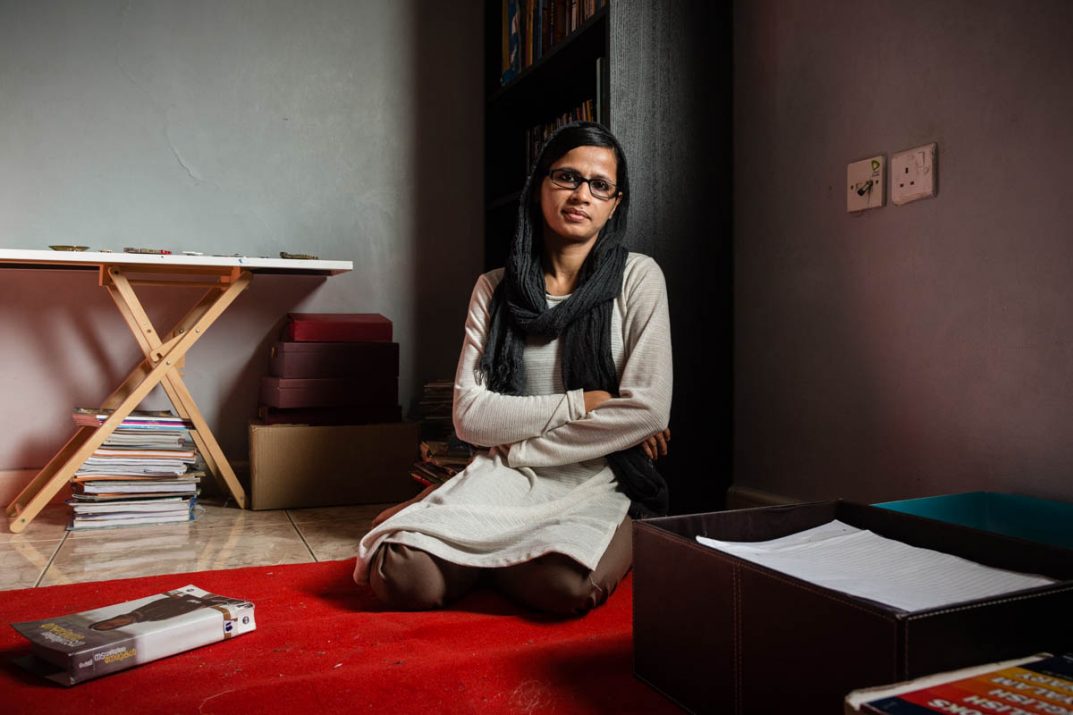 It was late in the day when I finally arrived at the small apartment on the upper floor of a villa in the Abu Hail district of Dubai. I was to photograph ‘Shemi’ the author of ‘Nadavazhiyile Nerukal’ (The truth in my path) for the National newspaper. I didn’t really know a great detail about Shemi before I arrived but the little of her story I did know fascinated me.

Shemi was tragically orphaned at the age of 13 and spent 4 years living on the streets of the southern Indian town of Kannur before finally finding a place in an orphanage for herself and her four sisters. Shemi’s ultimate dream was one day to get a government job and by educating herself she finally achieved her goal and became a nurse. It was years later after marrying and moving to Dubai that Shemi fell into a coma and suffered from memory loss. As part of the process of recovering she began writing down the story of her childhood as she remembered the fragments. The result is an autobiographical novel which tells a story of tragedy as well as hope, a fight against the kind of adversity that hopefully most people will never experience.

When I met Shemi I had no idea what kind of photograph I was going to make. Shemi’s husband Fazlu told me that Shemi wrote all her novels sitting on the floor in the room where we were currently talking. Several boxes of paper were laid out neatly on the bright red carpeted floor along with a few reference book, dictionaries etc. The location was perfect, it was very humble but so was Shemi. She also struck me as a very quiet and private person and by trying to take her out of her environment I would probably be making a very uncomfortable portrait.

Shemi also liked to keep the room quite dark, I had opened the curtain a little but when she walked in she went strait to the window to close it again. It seemed appropriate to me to make a portrait that was subdued. I opened the curtain again just enough to actually light her, I knew my shadows would go really dark so I over exposed the shot slightly so as to keep a little shadow detail in the knowledge that I would need to pull everything back again in the postproduction. As long as I didn’t allow the highlights to start bleeding out it would work well.

When I make this kind of portrait depending on who I am photographing I often like to see what the person is going to do in front of the camera. This is not to make them feel uncomfortable but rather to give them the opportunity to present themselves as well as give me some idea of what barriers I am dealing with. I can then start taking control as I need to, to direct them or look for a reaction. I always like to think that it may be my photograph but its certainly not my portrait.

What impressed me initially about Shemi was that there was an incredible honesty in her eyes. She wasn’t afraid of me or the camera. She wasn’t completely open either, she sat in front of he camera with her arms crossed which people often do as a matter of course when being photographed. I think it’s a bit of a defense mechanism. In Shemi’s case I actually really liked this. I can understand why somebody who has experienced a life like hers might want to be slightly closed but her eyes told an entirely different story and for me it was this polarity thatreally worked.

One of the reasons I love photography so much is because it is a passport to meet some fascinating people and the opportunity to have them surrender a little piece of their lives to you. I was really happy to have met and photographed Shemi that day.

Shemi is now looking for a publisher who can translate and distribute her book into English and I really hope she finds somebody because I would love to read what by all accounts is a very powerful, important and moving story.