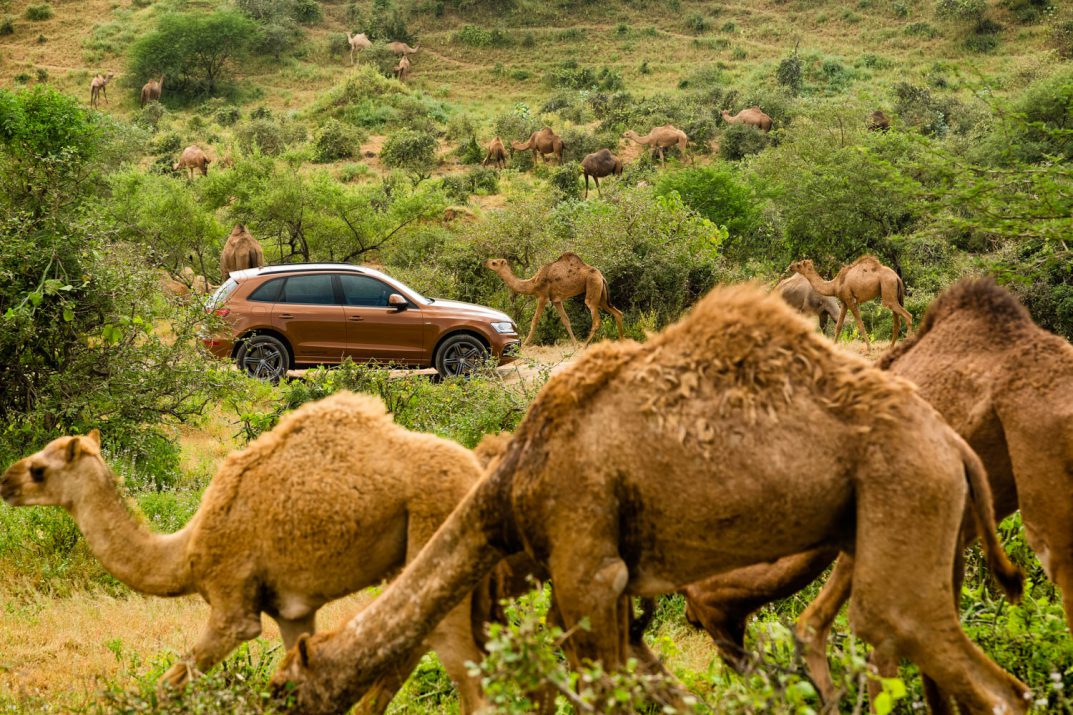 In this edition of Behind the Lens I want to look at a car shoot I did for Audi magazine. The brief was very open. “Here have an Audi Q5, go to Salalah and take lots of pictures of the car”. Myself and Noel Ebdon the writer on the story set off on our journey from Dubai which would amount to a gruelling 2 day drive. I had also picked up a bad case of food poisoning from a certain luxury hotel a few days before that I won’t mention for obvious legal reasons so I was happy to let Noel do the driving while I suffered in the passenger seat.

I had never been to Salalah before and had no idea what to expect, Noel told me (on day two when I could start to string a sentence together) that we would pop up over a big hill and it would suddenly turn into a lush green oasis. I must say as I stared out of the window at the ‘lunar’ landscape flashing by, I was a little skeptical.

After another 500 miles or so we popped up over a big hill and it suddenly turned into a lush green oasis. I did notice the smug look Noel glanced at me but I was also blown away by my surroundings. It had literally become green and foggy. The buildings had a weird rustic mould growing on them which looked like something out of a movie. There were camels too.

Now I had seen more than my fair share of camels in my decade spent in the Middle East but you usually see then wandering over sand dunes not surrounded by lush green forests. It was all a bit weird. I did know that I had to get some kind of camel and Audi Q5 shot, hell the camels even matched the colour of the car.

Now I’m no stranger to the countryside, I grew up in rural Gloucestershire so I was pretty ok with cows but camels just baffle me. They seem to have a mind or their own, their own pace, their own direction. I had been able to get pictures of them wandering around the undergrowth but it seemed pretty obvious that getting them to pose with the car was going to be a challenge.

I thought about getting Noel to run around like a chicken trying to take off but I suspected that I might get the “you can just bugger off” look from Noel and I was sure the camels would just ignore him anyway.

By day two I was getting loads more camel pictures but still no way to include the Audi Q5. My frustration was growing. Renting some from an Omani camel farmer was maybe a possibility but as we drove over a crest of a hill my heart skipped a beat. Camels, thousands of them and a road with a hilly backdrop full of even more camels.

I rattled of hundreds of frames in the next few minutes with a big grin on my face as a stream of camels paraded past the Audi Q5. No camel farmer counting his wedge of cash, no assistant with a bag of camel treats or a production team flapping their arms just out of shot.

For me one of the greatest attributes a photographer can have is optimism. The unfaltering belief that the world will constantly keep surprising you, and it does, because Mother Nature is truely the most creative and resourceful producer I have ever worked with.